When linux kernels became distributed in zImage format ( from 4.19 ) I noticed, that my cfcard has I/O errors with zipped images. It means, reading from cfcard is too slow.
Then I try faster card. zImages boot fine from it, but fast cfcard is not visible from linux after boot.

With xeno advice I made some test and found this:

- card X can be used for zImages, card Y not (I/O errors)

I am not the kernel guru, but this is only main difference what I found.
Also I don't know, on what depend selection pata_of_platform vs. electra-cf - speed, size, UDMA capability?

Now I will test which exact kernel version 4.9.x is first with this issue, and also check what type (pata_of_platform vs. electra-cf) is old card Y on new kernel.

Many thanks for the test results. I will try to figure out where the problem is.

I have some addendum:

with newer kernels (4.9+) where newer cf X not visible, old cf Y is allways visible, and recognized like electra-cf:

It means, that problem can be connected with speed/size/other attributes of cf and not with electra-cf/pata_of_platform

some more observation - with 4.9 and newer kernels, both cfcards recognized as electra_cf, pcmcia socket recognize inserted cards, only newer card Y not recognized by scsi / ata:

Thanks a lot for the observation and for the log files. I compiled a new RC5 of kernel 5.1 today.

I successfully tested it with my 256MB SanDisk CF card connected to the onboard CompactFlash Card Slot today. 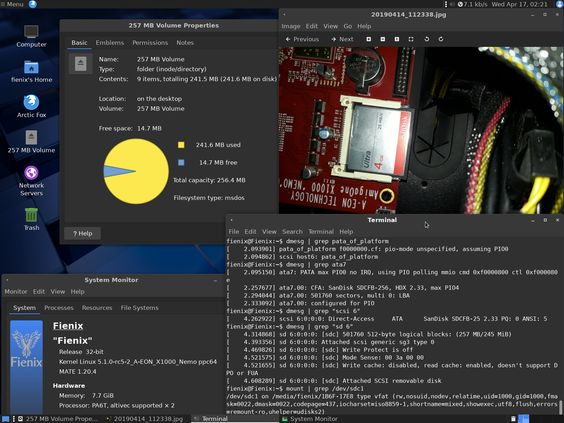 both cfcards visible - here is boot with the new one X:

both cfcards visible - here is boot with the new one X:

Great news! I am happy. I will use the pata_of_platform-v2 patch for all new X1000 Linux kernels.

Thanks for reporting this issue!

xeno74 wrote:Great news! I am happy. I will use the pata_of_platform-v2 patch for all new X1000 Linux kernels.

thank you for quick fix and good work.

Could you please test the stable kernel 4.20.17 with your CF cards?