MATE - Debian Jessie .
its is addictive .

Did you try to install ubuntu Mate? You need an installed (L)(X)ubuntu 14.10 to install ubuntu Mate. If you have an installed (L)(X)ubuntu 14.10 then you can install the MATE packages with apt-get or something like this. For the Ubuntu-MATE splash screen, artwork, icons, and themes you have to add the Ubuntu MATE PPA to the sources.list.

I plan to try using Ubuntu 15.04 once I do a new netInstall ramdisk and fresh install.
My Hardrive is partitioned to support 4 Linux installations so no room for Lubuntu 14.10.
Currently have Debian Wheezy,Debian Jessie and Lubuntu 14.04 installed.
Sam460ex : Radeon Rx550 Single slot Video Card : SIL3112 SATA card
Top

Ubuntu Mate Desktop is now an option with the Lubuntu 15.04 Sam installer.
Seems if if no Display Manager is installed by default so until yo install one X must be started manually .
Resorted to installing lubuntu-Desktop
apt-get install lubuntu-desktop 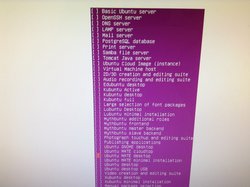 The solution would be to instal both Mate-Desktop and Lubuntu-Desktop during the installation.
Sam460ex : Radeon Rx550 Single slot Video Card : SIL3112 SATA card
Top

Yes.
Resulted in a working system the booted to the terminal.
The X system could be started manually from the terminal but did not start automatically.
Tried to install Lightdm but once installed I could not log in for some reason.
at that point I uninstalled lightdm and installed Lubuntu desktop from the terminal.
That resulted in being able to log in ok.
Think that I will do a reinstall later selecting both Lununtu-desktop and Ubuntu-mate .

Did you install the ubuntu MATE desktop?

seems that only one or the other can be selected or an error will result.
So opted for Lubuntu ,then will install Mate after from a LxTerminal .
Sam460ex : Radeon Rx550 Single slot Video Card : SIL3112 SATA card
Top

Return to “Platform: AmigaOne 500 and Sam series - Linux Only”