Many thanks for testing the alpha1 with your Logitech USB wireless mouse!

I think the latest HID updates are responsible for this issue. The kernel developers modified the file hid-logitech-dj.c again three weeks ago. The HID updates were between the alpha1 and the alpha2.

Please test the alpha2 with your Logitech wireless USB mouse.

Your results of "glxinfo | grep -i opengl" are great! You have hardware 3D acceleration with your ATI/AMD FirePro 2260!

The RC2 of kernel 5.3 is available for testing.

New:
It also includes:
Downloads:
Screenshot of openSUSE Tumbleweed 20190722 PPC64 with the RC2 of kernel 5.3 and with Mac OS X 10.5.8 Leopard PowerPC in a virtual QEMU/KVM-PR machine: 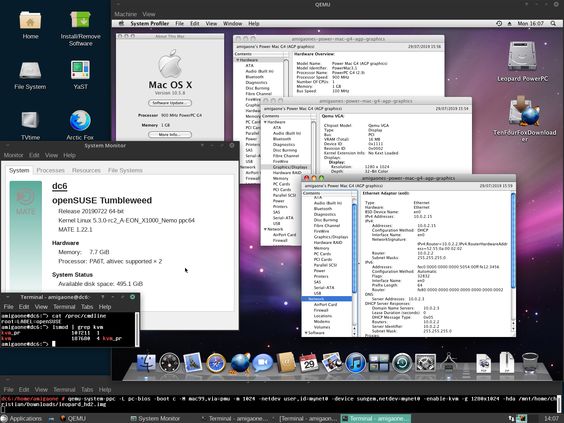 @SailorMH
Please test the kernels with your CF cards.

@Mechanic
Please test the kernels with your JMB363 card.

@Darren
Could you please submit your new pcmcia patch to the kernel developers?

RC2-hid1 = Boot to Firepro Logitech mouse does not work.

RC2-hid1 = Boot to Firepro Logitech mouse does not work.

Thanks a lot for testing the RC2 kernels on your X5000. I removed the changes of the file hid-logitech-dj.c for the RC2-hid1 yesterday. Maybe I have to remove the complete HID updates.

I am looking forward to getting your alpha2 test results.

Christian
Can confirm 5.3-alpha2 boots but Logitech mouse does not work.

acefnq wrote:Christian
Can confirm 5.3-alpha2 boots but Logitech mouse does not work.

OK, the Logitech wireless USB mouse works with the alpha1 but it doesn't work with the alpha2. In my point of view, the latest HID updates are responsible for this issue. Please open a bug report.

And you have 3D hardware acceleration with this xorg.conf.


That means, Michel's answer is correct.


Michel Dänzer wrote: Reviewing the information, I'm afraid it's not clear that there's a bug here.

The description says the FirePro is the secondary card in a PCIe 1x slot, whereas the R7 is in the PCIe 16x slot. Thus it seems pretty clear that without explicit configuration, Xorg should be expected to come up on the R7. Arguably it was actually the previous behaviour that was buggy.

Something like this in /etc/X11/xorg.conf should be enough to make Xorg use the FirePro card:

Many thanks for your work!

Could you also please test the uImage-5.3-hid2 with your Logitech wireless USB mouse? This is the kernel 5.2 + the latest HID updates.