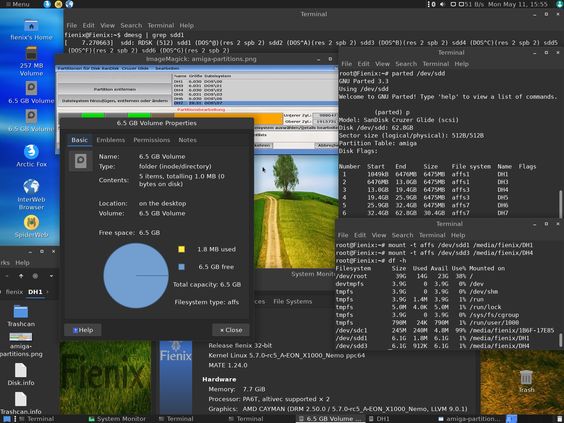 I've been doing some FFS testing lately as it happens. I actually setup a DOS3 volume years ago to share data between OS4 and Linux. But I tested writing to a DOS3 volume and it was slow. Generally I find AFFS support is built in A1 kernels and don't recall having any major issues.

However I have had some issues pop up in testing. First is mounting. It would be good if a volume could be mounted from the desktop. but this is corrupted. My DOS3 volume turns up on the sidebar, but it thinks it is Ext2 for some reason, and I accidentally mounted it before finding out I had let Linux mount an Amiga partition as Ext2. It corrupted a file. I did a check in OS4 and it passed. Then restored the file from a backup. The volume is marked as bootable so that may have confused it.

I've mounted on the command line but just a basic mount with no options. It works but I wonder if this causes issues as I found all the files in the FFS volume are root only. It gets annoying when I want to edit a simple file and it won't let me. I think the "open as root" option should be on every desktop as I see this problem a lot. You need to be root to unpack the kernel and install it.

I can see I need to add to fstab, but I would prefer not to modify the system fstab and add to a user fstab instead. Unfortunately, they introduced this useful feature in the form of fstab.d, but then decided it was a bad idea and removed it. I don't know. It protected the system fstab from tampering and they thought it was a bad idea! Seriously, that's messed. That would be like the OS4 team revoking DOSDrivers and forcing people to edit one Mountlist file by hand. That would be going backwards.

Many thanks for your report!

I tried to mount an AFFS partition with the label.

Unfortunately without any success.

There is amiga-disk. It can read an RDB and detect up to DOS6. But I can't see it display labels. Parted can display the labels or perhaps, the Amiga DOS device name.


I tried to mount an AFFS partition with the label.

I've tried to mount with label and UUID, but found it was non existent.

The only clue I can give, to specify an Amiga volume, without using the device name, is to use the udevadm command. But it needs a device name to tell you other references. Using /dev/sda14 as an example in my case:

Under AmigaOS, you can give any partition any device name at all.

You're welcome. Funny enough, I only know this info because I was recently experimenting with it, and trying to work out how to detect Amiga device points from a script. I didn't think to post my findings until I saw your thread.

I think I can figure out the ID thing. It is particular to Linux filesystems. Because Amiga partitions to not have a UUID, at least not that I know of, none can be found. As an example the blkid command won't see any. Or it only prints known filesystems. The DOS device name that AmigaDOS uses is too unreliable to be used in place of the UUID. AmigsDOS has been aware of this since inception and IIRC used the datestamp as an ID in the case two volumes were inserted with the same label. So this could be used to generate a UUID but AFFS would need to generate it so other Linux tools can see it. I don't know if it's possible.

Actually, it can be on a second HDD as well. In my case, my X1000 has both my SATA drive and my XE IDE drive attached. There is cross over in some device names. Now, when AmgaDOS boots, it will detect this and append some number to the DOS device so they differ on mount. During setup, Media Toolbox tends to look through your partition devices, so adding a new partition will always have a unique device name.

With the information shared in my previous post I've just written three commands prior to this reply. They can be used to print a virtual UUID, a mount command and a fstab entry. I'll just post the scripts with embedded filename. They don't do any error checking. Hope it helps.

Thanks a lot! Interesting!

I would like to mount my BDH0 partition with the name. First I have to figure out which affs partition has the name BDH0.

I can do that with:

No, I hoped, that BDH0 is always sda1 for an easy mount.