* Before I start let me say that this is an experimental procedure that is based on Xeno74's Guide here (http://forum.hyperion-entertainment.biz ... =35&t=2840)

The end result I got was a working Vivid Vervet developmental version 15.04 integrated with the Lubuntu desktop - not the newer Qt one. I followed xeno's steps except for a few changes so the Lubuntu version will work.

Important => xeno's issues a cleanup every now and then. I'm against it as during the installation I went offline from time to time and to recover had the installation use the stuff which was already downloaded. Otherwize, I might have got stuck and unable to continue installing with a forceful trigger (apt-get -f => with INSTALL or DIST-UPGRADE). So you can always clean up after everything is done and working accordingly.

We change some things between 16 and 17 - lets call it 16.5 => We want to install Lubuntu so we need the relevent repository beside the one hosting Ubuntu. Because of the current state of Lubuntu and its support of Power computing platforms, we need stuff from its daily updated PPA by the Lubuntu developers. I recommend using the following line: "add-apt-repository ppa:lubuntu-dev/lubuntu-daily" => this is a neccessary step to get the latest updates while knowing there might be some instability. During the installation conflicts may arise between the Ubuntu installation sources and The Lubuntu daily PPA which I worked through using the following commands: "apt-get -f install" (if you see major warnings of dependencies issues) and "apt-get -f dist-upgrade" and it simply forced its way through those issues until it finished. Keep in mind like I said before that during this process I had no online connection so I couldn't use the apt-get update command so not cleaning up was important. You may not need all of this. In addition I'm adding the PPA of the newest Lubuntu artwork: "add-apt-repository ppa:lubuntu-art/daily". always remember to press enter when prompted about adding the repository.

A comment on step 26 => I didn't need to change anything as the new xorg.conf.new file which I copied to the right directory and named xorg.conf already had the Radeon driver listed.

** About the new Mesa procedure with the downloadable drivers (http://www.xenosoft.de/MesaLib-10.0.4-p ... al.tar.bz2) => For me it didn't work the first time and I logged on with the software driver and then within Lubuntu ran the procedure again (including adding the "export" line to ".profile" in the USER directory) and only then as you can see from the pic, it worked. After that I still don't get all of the colors everywhere - lets say 95% percent is colored right.

*** As of now I couldn't get Cairo-dock to display the right colors or for Compiz to work. Haven't tried yet Screenlets. Mplayer still doesn't work and now Minitube after an installation of gstreamer packages also doesn't work. I use VLC for video offline and also online via the Viewtube add-on for Firefox (requires greasemonkey) - http://isebaro.com/viewtube. the user privilegies for sound have been enabled from the start so get pulseaudio from either the Lubuntu Software Center or Synaptic and choose a digital output on the last tab and SPDIF on another tab..

**** I guess because the Lubuntu team are focusing on LXqt they haven't changed much on the base Lubuntu desktop so you pretty much get what was on 14.10 only some things are missing so the vanilla desktop resembles LXDE and is light. You can add back the stuff you miss with the Lubuntu app store. Keep in mind that upgrading to the latest LXqt requires severe system changes (removal of desktop) and for the non-console compliant users it can render their Ubuntu system inoperable.

***** For me this ubuntu didn't auto-mount partitions other than the system partition so be prepared to skip the waiting using the "S" trigger just before login. Afterwards mounting works with PCMANFM and the disk utility. Just not at boot. Some you can auto-mount directly with the default disk utility and some refuses to be recognized at logon. 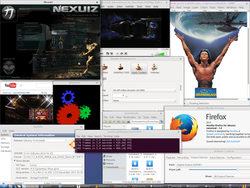 Many thanks for your explanation. And thank you for testing Lubuntu 15.04. It's very important to test the devlopment version of Ubuntu on our AMIGA one X1000.


Srtest wrote: Important => xeno's issues a cleanup every now and then. I'm against it as during the installation I went offline from time to time and to recover had the installation use the stuff which was already downloaded.

I had a problem with my file system space. The partition is only for testing and isn't really big. I had to clean up in-between times. But thank you for your hint.

Hence, it is enough, when installation fails due to an harddisk recognition error, to enter the installation shell and create an directory '/lib/modules/<name_and_version_of_the_linux_kernel>', e.g. for Vivid Vervet 15.04 and the current release candidate of vmlinux 3.19:

For testing, I also rebuild the ramdisk image with just the kernel modules included (so, no scripts have been replaced) and indeed the installation process works with it:

(Xeno: if you wish, please host the file again on your site)

The story ends sad nonetheless because even though installation worked fine, starting the new installation failed.
There is *no* kernel panic or something else. The output on screen just stops shortly after mounting the "root"-partition.
An Xubuntu-X-server is already on its way up at that time (by switching with CTRL-ALT-F7 one can see "xubuntu 15.04" with blinking dots as progressing bar and with CTRL-ALT-<SOME-NONE-FunctionKey> there are X-server message saying that it is waiting for something to complete.)

nexus wrote: The story ends sad nonetheless because even though installation worked fine, starting the new installation failed.
There is *no* kernel panic or something else. The output on screen just stops shortly after mounting the "root"-partition.
An Xubuntu-X-server is already on its way up at that time (by switching with CTRL-ALT-F7 one can see "xubuntu 15.04" with blinking dots as progressing bar and with CTRL-ALT-<SOME-NONE-FunctionKey> there are X-server message saying that it is waiting for something to complete.)

I have uploaded it recently: initrd-15.04-modified.gz

Sorry because of the issues after the installation. Could you add 'rw' to your kernel bootargs, please?

Or you could try to add 'nomodeset' to your kernel bootargs:

Please tell us, how these bootargs work.

xeno74 wrote:
Could you add 'rw' to your kernel bootargs, please?

Or you could try to add 'nomodeset' to your kernel bootargs:

There is no change in the failing booting process for both.

By the way the "ro" could/should be left out, I guess, because it means "read only" which seems to be contradictory to "rw" which stands for "read/write".

nomodeset is unknown to me, but unfortunately didn't help either

I checked the output of the boot process again and recognized that the last 10 messages have been error messages:

and once, there was:

Do not know if this helps in any way

Can you boot in the single-user mode with init 1?

xeno74 wrote:Can you boot in the single-user mode with init 1?

No difference here. I searched the internet for the error messages.
The "plymouth" messages concern indeed the boot-logo animation. It is said this can be turned off completely by adding "noplymouth" to the GRUB boot arguments. However, this seems to have no effect when putting that to the CFE/Linux boot arguments.

I then used kernel V3.18 to booting the already installed Vivid Vervet 15.04. In this case, the plymouth-errors disappear and there is an "OK" for this stage in the booting process. However the "unreadahead"-error stays and is the real culprit of the problem.

Do not know yet, what that error means.
cheers,
nexus
Top

nexus wrote:However the "unreadahead"-error stays and is the real culprit of the problem.

Do not know yet, what that error means.
cheers,
nexus

Do you have the A-EON Live Remix DVD or another Linux distribution installed on your AMIGA one X1000? If yes, you could try to delete the following file:

Ureadahead can load programs like Firefox faster after a system boot.
http://www.amigalinux.org
http://www.supertuxkart-amiga.de

Well it is a peculiar situation. For me it was an installation from two different sources that could've created unrepairable race conditions. It booted right. then I my fiddling with the newest Radeon driver and Xserver led to it being un-logable which means it got to the point it should log on and then got stuck exactly on the splash screen that was mentioned here only it ended it several loops of retrying until it gave up and kicked me over to the console. This happened beacuse I additionlly used a repository I once used before called Canonical X-statging that put a non-working Xserver. I tried the latest Radeon and Ati from debian and it didn't help only with the technical appearance of the splash screen but nothing afterwards. an examination revealed there was something related to the Xserver of course, and also to Plymouth and Lightdm. One was hindering the other. The message I got was this message about plymouth and lightdm. I found out that the Xserver wouldn't do something that was needed to continue logging on and it wasn't the lightdm or plymouth which were working. A removal of said experimental Xserver version, removal of the statging-X repository (that once worked great) and reimplementing the one that came with the installaion made sure I was able to log on on the normal lightdm greeter screen. So I don't know actually what the hint is. maybe it is something about the driver used with this developmental version and being newer or maybe not new enough.

On another matter I can confirm Xeno's solution with the addition of the "rw" trigger before boot starts as it doesn't work without it.
Top

I spent way too much time this weekend on trying to find out why Vivid Vervet 15.04 does not startup on the
X1000 after an installation from scratch, but I finally got to the root of the problem.

I first thought, the culprit is this failing "playmoth" script and/or "ureadahead" but I recognized that the same errors can be seen with 14.10, too.
Nevertheless, i installed 15.04 without playmoth by substituting it with "systemd". In this way, I was able to see that the real problem is,
that there is always a dependency failure of non-root partitions (e.g. /home or SWAP) for 15.10. Means, e.g. "/home" cannot be
automatically mounted or the SWAP-Partion cannot be included. "Systemd" simply skips the attemps after 90 seconds while with "plymoth"
the startup process is stucked forever.

So, I wonder if those people using successfully "Vivid Vervet 15.04" after upgrading from an earlier distribution have configured a separate "/home" or "Swap" partition?

However, even after having 15.04 up and running, I see several issues poping um once the X-Server is running.
In the end, 15.04 works but I do not recommend it to use on the X1000.
Anyway, Vivid Vervet is makred as a development branch for a reason, I think

@Xeno
If you have contact to the ubuntu/linux powerpc guys, it would make things easier for us if they could apply the patches done for the X1000 to the official powerpc source tree