PNG-transparency for buttons on OS3.2?

This forum is for general developer support questions.
Post Reply
2 posts • Page 1 of 1

PNG-transparency for buttons on OS3.2?

I've got PNG files (for example those from AISS but also self made ones) with a transparent background.
Now I'm trying to integrate them into image buttons.

To test it I've taken the OS4 ReAction imagebuttons example and modified it to display one of the included GIFs and one self-made PNG next to each other in two buttons.

On OS4.1 running this 68k executable looks like this: 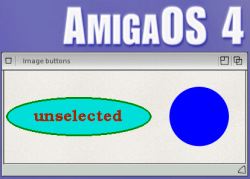 On OS3.2 running exactly the same 68k executable looks like this: 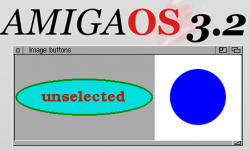 Is the OS3.2 png.datatype supposed to support transparency in image buttons at all?

Re: PNG-transparency for buttons on OS3.2?

Not a fix/solution, butyou can try with WarpPNG (http://aminet.net/util/dtype/WarpPNGdt.lha) and see if there is some difference.
Top
Post Reply
2 posts • Page 1 of 1